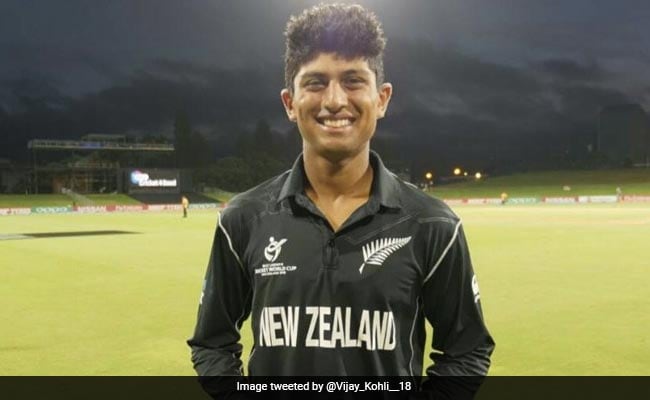 The craze for cricket is such in India, which no one can even imagine. Considers Indian cricket as his first hobby and idealizes the cricketer. Today we are going to tell you the story of a cricketer who is named after Rahul Dravid and Sachin Tendulkar, but he plays not for India but for New Zealand (Rachin Ravindra). Huh. By the way, there are many Indian-origin cricketers who have played or are playing for New Zealand. Let’s know about this great player.

This player’s name is Rachin! Don’t be surprised! Yes friends, the name of this player is Rachin. R to Rahul and Chin to Sachin! Why is he named Rachin after all? Actually, Rachin’s full name is Rachin Ravindra. His father’s name is Ravi Krishnamurthy, who settled in New Zealand in 1990 with his wife Deepa Krishnamurthy. Ravi has also been a cricketer. He also used to play cricket for Bangalore, but could not play much, so he decided to make his son a cricketer.

Ravi was very much encouraged by Sachin and Rahul. So he named his son Rachin. Rachin also illuminated the name of his father. Growing up became a great all-rounder cricketer. Rachin represented the New Zealand Under-19 team in the Under-19 World Cup in 2016 and 2018.

Not only this, Rachin has also played 6 T20 matches so far, Rachin recently made his debut in the series played against Bangladesh. Apart from this, he has also been a part of the Kiwi team selected for the World Test Championship. Rachin Ravindra is very active on social media. He considers Sachin Tendulkar as his idol.