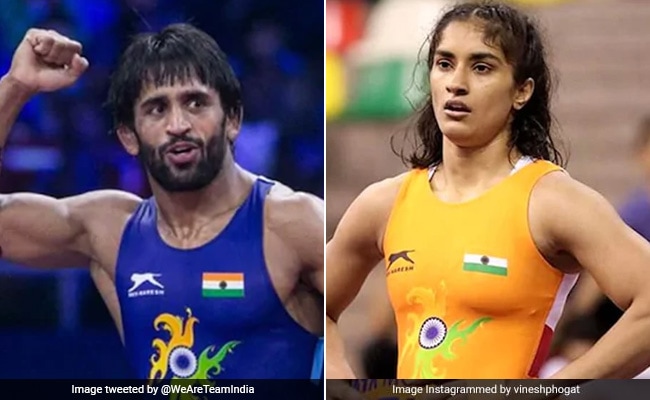 Indian wrestling: The year 2019 proved to be a great year for Indian wrestling. Most of the top wrestlers performed as per the expectations in 2019 but the brightest star among them was Deepak Punia. Veteran Bajrang Punia and female wrestler Vinesh Phogat also kept the tricolor high on the world stage. In view of this performance, the wrestlers are expected to perform well in the Olympic Games to be held in Tokyo. The poor performance of veteran and Olympic veteran Sushil Kumar and Sakshi Malik was also in the news amid this stellar performance of new wrestlers. This year, securing five medals and four Olympic quota places in the World Cup Championship was an unprecedented performance for Indian wrestlers.

Bajrang Punia (65kg) and Vinesh Phogat (53kg) took podium places besides securing Tokyo 2020 quota but were expected to medal better than bronze. Deepak (86kg) became the junior world champion earlier in the year and made headlines by securing an Olympic quota with a silver medal at the World Championships. He would have become the second Indian wrestler to do so after Sushil Kumar (2010) by winning a gold medal, but was forced to pull out of the final due to an ankle injury. However, the best news came at the end of the year when he was voted the Junior Wrestler of the Year by United World Wrestling, the governing body of the sport. Deepak’s father from Haryana sells milk. Deepak first came into the news in 2016 through the Cadet World Championship gold medal. In 2018 he won only one medal at the senior level but this year he finished second after two bronze and one silver with his career best performance in Nur Sultan.

The journey from junior to senior circuit has been good for this wrestler, but now he is the number one wrestler in the world, which should have high hopes from him in the Olympic year. Bajrang Punia, on the other hand, won every tournament he participated in before the World Championship. He claimed gold medals in Dan Kolov, Asian Championship, Ali Aliyev and Yasar Dogu but his ‘leg defence’ was well understood by his rivals till the World Championships. Daulat Niyazbekov of Kazakhstan halted his stellar form in Nur Sultan and it came as a surprise as he was a strong contender to win the title as the world number one wrestler. Bajrang complained after the loss that the judges favored the domestic wrestler but it cannot be denied that he had lost an early lead. He is currently ranked second in the world and has started working on strengthening his weak defense by working with new Russian partner Viktor Rosadin at a training camp in Sonipat.

Another wrestler from a poor family, Ravi Dahiya impressed with his strong technique, powerful defense and most importantly his mood, which makes him a strong contender for an Olympic medal. His bronze medal in the World Championship came as a surprise to many but he showed his mettle in the Pro League. With this, India can expect more than one medal from wrestlers in Tokyo Olympics. Rahul Aware also increased India’s medal tally with a bronze, although it was in the non-Olympic 61kg category. Vinesh Phogat has raised her Olympic medal hopes by winning her maiden medal at the World Championships. In one of the biggest events of the Olympic categories, Vinesh not only beat her rivals but also boosted her confidence by defeating a few.

Amidst a slew of new wrestlers in the field of wrestling, Sushil Kumar, who won two Olympic medals, and Rio 2016 bronze medalist Sakshi Malik, have had a tough year to prove themselves. Both competed in the World Championships after winning the national trials, but neither of them could last more than a round. Speculation about Sushil’s (36-years) wrestling future also intensified, while young Sakshi (27-years) has been underperforming in most tournaments after winning bronze at the Rio Olympics. He was also thrown out of the TOPS system of the government, due to which his future does not look good. However, at the end of the year, he won the national title in 62 kg.

Video: Women’s riot, wrestling at the Ghat of Varanasi