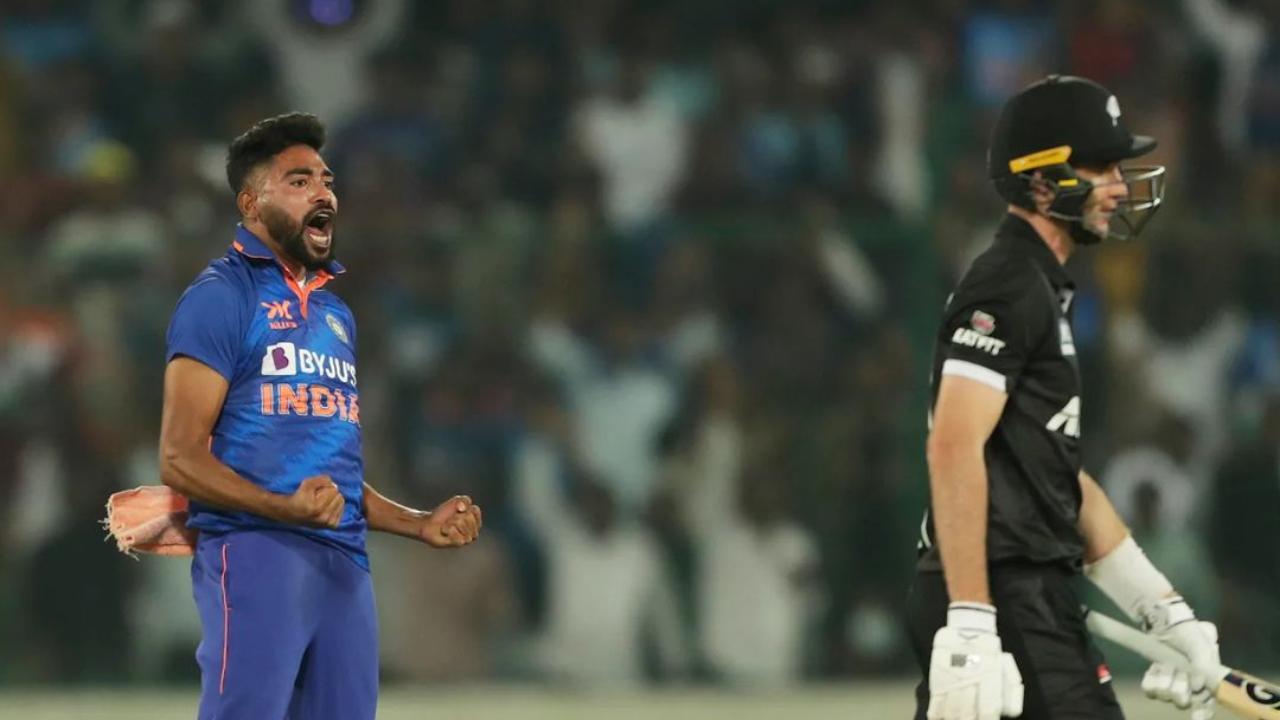 New Zealand off-spin all-rounder Michael Bracewell played a brilliant counter-innings of 140 off 78 balls but his comeback went in vain as India won the first ODI by 12 runs to take a 1-0 lead in three matches. series at the Rajiv Gandhi International Stadium here on Wednesday.

Later Shubman Gill Made a brilliant display of batting to score 208 runs in 149 balls with 19 fours and nine sixes, and became the youngest batsman to score a double century in men’s ODIs, as India posted a mammoth 349/8 At 131/6, New Zealand were in trouble.

Bracewell, who hit 12 fours and 10 sixes in his 78-ball innings, chased down the target and put on 162 runs in just 102 balls for the seventh wicket with Mitchell Santner, who scored 57 off 45 balls.

India were put under immense pressure and needed the wickets of local lad Mohammad Siraj, who took 4/46, besides Hardik Pandya and Shardul Thakur taking a wicket each in the end to take the hosts 1-0 in three matches. Gave a lead of 0. Chain.

Bracewell slashes, pulls and sweeps well against the spinners, while Santner gains momentum by sending Hardik and Washington Sundar anything overpitch and short over the boundary ropes. Shardul was brought back in the 37th over and Bracewell hit a four over extra cover, before reaching his half-century with a six over mid-wicket.

He remained serious on Shardul and Kuldeep Yadav, playing along the ground and hitting his boundaries with ease, with Santner also joining in the fun. Bracewell attacked Washington, hitting him for sixes over long off and wide long on as New Zealand needed 103 runs from the last ten overs.

Mohammed Shami Brought back to end the partnership, but Bracewell scooped it over fine leg for a six. After this, he completed his century in 58 balls by hitting Shami for a six over long on in the 43rd over. Santner completed his half-century by hitting three fours on the fast bowlers.

Siraj brought India back into the match by miscuing Santner at deep midwicket and got a single off the very next ball to rattle Henry Shipley’s stumps in the 46th over. But Bracewell held on to Hardik for sixes over mid-wicket and square leg in the 47th over, before taking a four and a six off Shami in the 48th over.

Hardik kept India’s hopes of victory alive in the 49th over by dismissing Lockie Ferguson at long-off for just four runs. With 20 runs needed in the final over, Bracewell hit a short ball from Shardul over wide long-on for a six and then gave it wide. Shardul ended things for India by trapping Bracewell plumb LBW with a dipping yorker. India heaved a sigh of relief as DRS confirmed the ball hitting the stumps.

Chasing 350 for New Zealand was always going to be a tough task. Devon Conway and Finn Allen started off with a few boundaries. Siraj, playing an international match for the first time on his home ground, provided the breakthrough by pulling a short ball from Conway towards fine leg.

Henry Nicholls smashed a brace of boundaries off Shami while Allen feasted on hearty short balls, hitting three fours and a six. Eventually, Shardul dismissed a dangerous Allen with a short ball straight to deep mid-wicket.

After Nicholls swept Kuldeep, the left-arm wrist-spinner bounced back the very next ball by hitting him with a googly. He then dismissed Daryl Mitchell in his next over, with the ball turning around and trapping the right-hander LBW in his crease.

Some tight, disciplined bowling from both ends and climbing rates meant that New Zealand continued to crumble. Glenn Phillips tried to slog Shami but the ball went back into the seam and clipped the batsman’s back leg before hitting the stumps.

Siraj strikes on the fourth ball of his second spell, gets some extra bounce and forces Tom Latham to pull it towards a sliding deep square leg. From there, Bracewell and Santner came back in spectacular fashion, but lost.

ALSO READ: ‘Sarfaraz is brilliant, but where is the place in Team India’, asks Milind Rege